Dr. Lamperti's latest rhinoplasty case study involves the analysis of one of his male revision rhinoplasty patients. Today's installment takes a look at the treatment of excessive columellar show and alar retraction.

A relatively common problem I encounter in patients seeking revision rhinoplasty is excess columella show. This finding can be related to a hanging columella, nostril (alar) retraction, or both.

Fortunately, there are several ways to repair these issues using revision rhinoplasty techniques. The proper approach to use is based on a preoperative analysis of the nasal anatomy itself.

Let's look at a patient of mine in which I was able to improve both his hanging columella and alar retraction.

The photo above best illustrates my patient's situation. He had a prior rhinoplasty many years ago and he was not satisfied with his prominent tip and overly exposed nostrils. 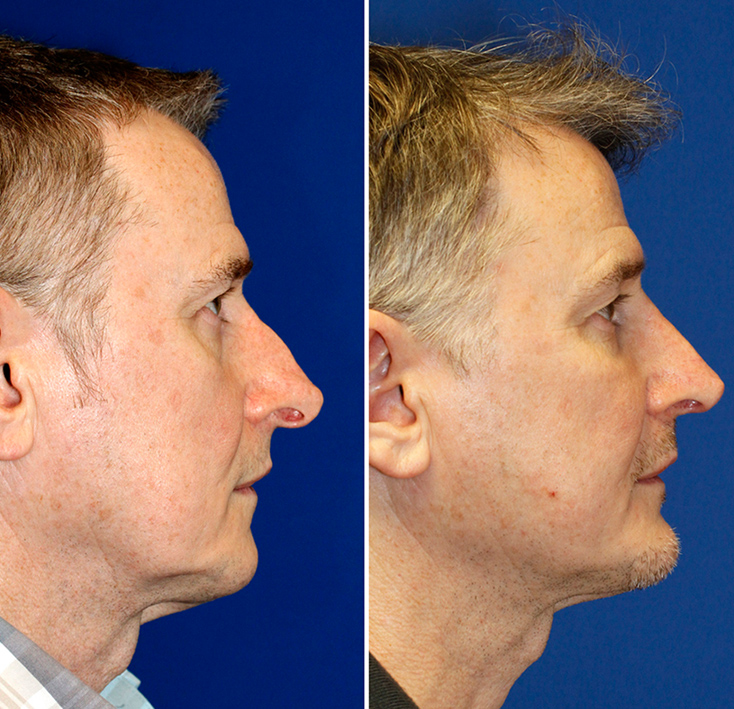 Another benefit of this approach is that it also provide excellent long term tip support to maintain proper tip positioning. During the process of repositioning the tip I also deprojected the tip so that the patient's nose didn't stick as far out from the face anymore.

There are several ways of fixing retracted ala. Alar rim grafts and lower lateral crural repositioning are two common methods that I use to address this problem. In our case study patient's case the alar retraction was actually related to the distortion of his lower lateral crural tip cartilages that evolved following his original rhinoplasty surgery. As his nose healed his lower lateral crura became twisted which led them to be oriented in a more up-down position. The end result is that the crura were no longer adequately supporting the nostril margins allow them to scar upward. During the patient's revision open rhinoplasty surgery I was able to diagnose this issue and reposition the malpositioned crura using sutures.

The before and after photo above illustrates how by correctly addressing both a hanging columella and alar retraction I was able to reduce his exess columellar show. At the same time you can see that his nasal tip is less projected. Another effect of lifting the hanging columella is to improve the patient's tip drooping.

Thank you and appreciate your work! Both combined have contributed to the look I was seeking for my entire adult life: awesome!