What causes a bulbous or rounded nasal tip?

The desire to create a more refined, elegant nasal tip is a common one.  It is one of the most commonly requested changes that my patients bring up. There are a few common factors that can create tip bulbosity. The first is the nasal tip skin itself. Patients with thicker nasal skin tend to have more roundedness to the tip. In some patients the skin can be thinned conservatively. This is more common in non-caucasian noses where additional fibrofatty tissue can be removed. The second common cause is the tip cartilages themselves. The lower lateral cartilages may be too wide, convex, or both.

There are many misconceptions about how to improve the appearance of a bulbous tip. Intuitively, you would think that to make a nose less bulbous one would need to remove a lot of tissue. This was a favored method in the past, but it turns out that resecting nasal tip cartilage with the hope of improving tip bulbosity often results in destabilization, pinching and an unnatural appearance. Often what we need to do to improve tip fullness is to reorient the convex lower lateral crura that contribute to this appearance.

To get a better understanding of how to improve tip bulbosity one needs to examine the anatomy of great looking nasal tips. When performing surgery on such noses one can see that a large component to the ideal aesthetics is having minimal to no convexity to the nasal tip cartilages (lower lateral cartilages). To improve this convexity one needs to be able to reorient the tip cartilages rather than just make them smaller.

How to refine the tip cartilages

Let us look at these bulbous tip treatments in more detail.

The cephalic trim technique has been used for several decades as a method of reducing tip bulbosity. In the past surgeons tended to be quite zealous in their resection of the lower lateral cartilage in their attempt to refine the nose. They realized that as the nose healed the internal scarring would lead to a flatter cartilage shape. In some instances they would leave only a width of 3 to 4 millimeters of cartilage still in place!

With time and experience rhinoplasty surgeons have realized that it is usually best to leave significantly more cartilage so as to maintain adequate structural support and prevent delayed tip pinching or alar retraction. As the nose heals after aggressive cephalic trimming the scar contracture process causes the alar cartilages to elevate and in many cases to collapse inward. This can result in both excessive columellar show and an over rotated tip.

The schematic drawing below illustrates where the cephalic trim is placed on the lower lateral crura. Dr. Lamperti typically leaves at least 8 millimeters (and often up to 10 millimeters) of LLC cartilage at its widest point during tip refinement. If further bulbosity needs to be treated or if the lower lateral cartilages are not too wide then the following additional techniques can also be used.

Dome binding sutures, like the name suggests, involve placing a suture above and below the actual tip defining point to cinch the cartilage. This leads to a more sharply-defined tip. In some cases (depending on the cartilage strength) this maneuver also pulls the lower lateral cartilages downward to help flatten them. This results in a less bulbous, rounded nasal tip.

This schematic shows where dome binding sutures are placed: A very powerful method of modifying tip shape and Lower lateral crural overlay involves incising each lower lateral cartilage across its short axis. The underlying skin lining is then detached from the LLCs for a few millimeters and then the cartilages are overlapped. The LLCs are secured in place with several sutures. This overlay maneuver not only shortens a too long lower lateral crura but it also causes the cartilages to become more flat as they are sutured together. Another effect of shortening overly long LLCs is that a droopy, under-rotated tip can be lifted.

Some patients' full tips are due to an overly prominent fibrofatty fat pad located between the skin and underlying tip cartilages. This is encountered more often in patients with thick skin. This fibro-fatty pad can be trimmed during rhinoplasty to further refine the nose. This patient is a great example of this process. You can see how the broadness and fullness of her tip has been refined with this maneuver.

Before and After Bulbous Nose Rhinoplasty Example Photos

The following before and after photos provide a look at a wide variety of bulbous nose repairs that Dr. Lamperti has performed: 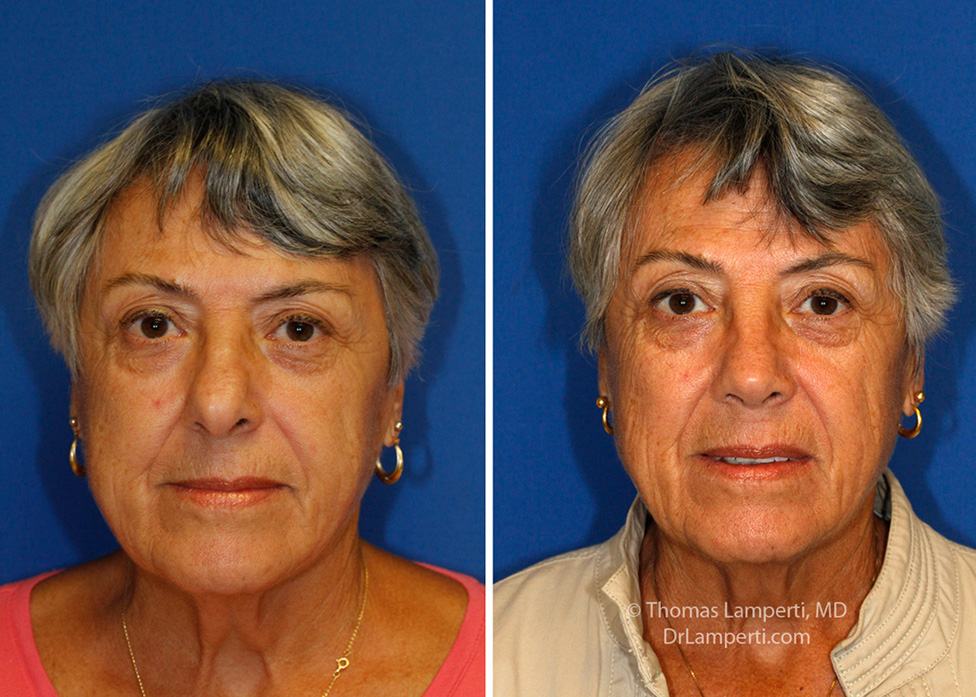 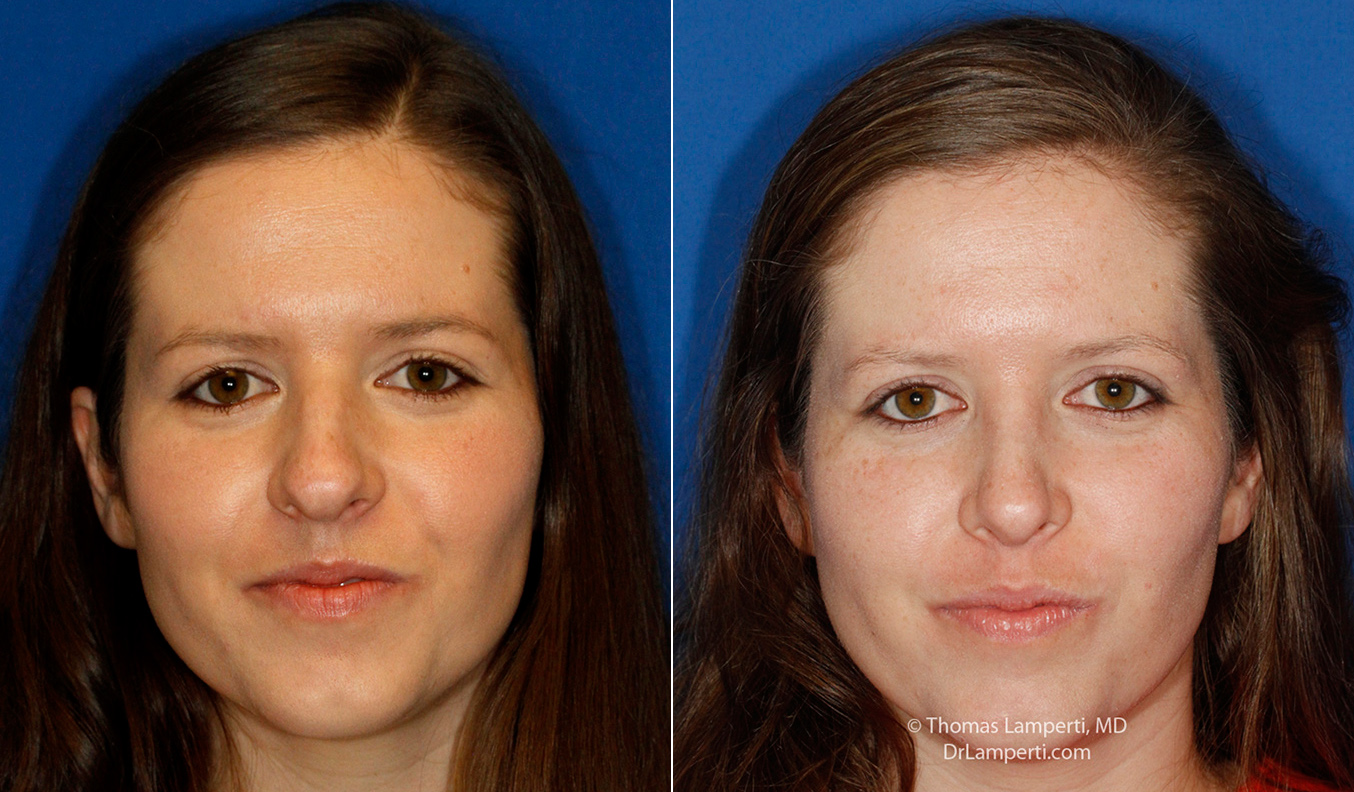 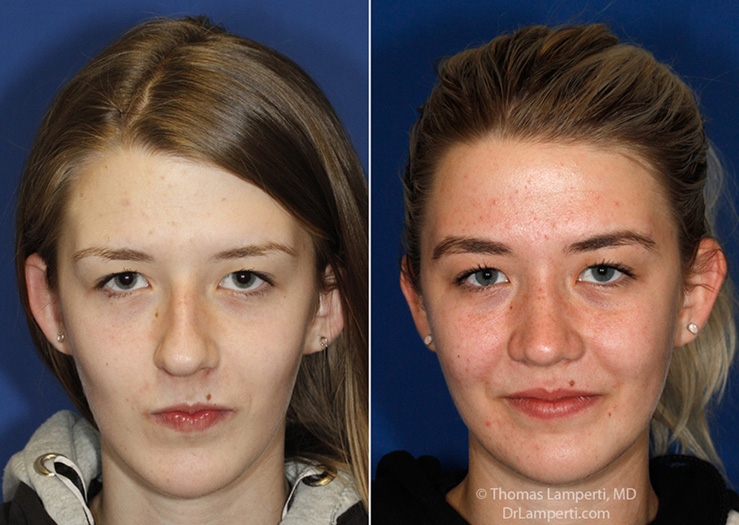 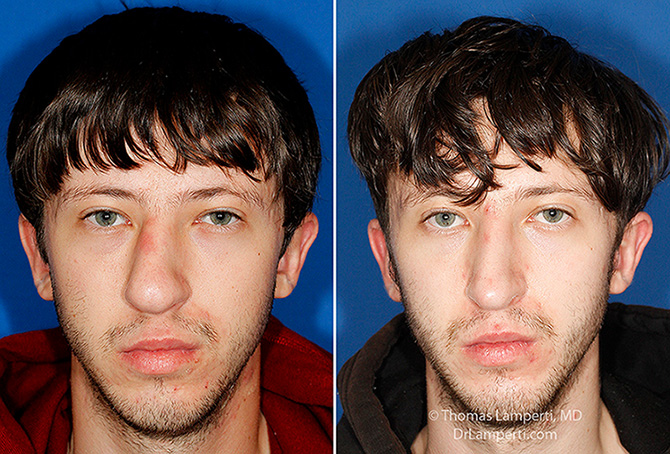