What is a saddle nose or boxers' nose deformity?

A saddle nose deformity (also known as a boxers' nose deformity) describes a nose where the bridge has an externally visible concavity (saddle) and loss of height. This typically occurs in the cartilagenous portion of the bridge above the nasal tip (middle third of the nose or middle nasal vault). This supratip depression is essentially the directly opposite problem encountered in a pollybeak deformity.

Due to the loss of cartilage support in the area this deformity can also lead to an overly up-turned tip (foreshortened nose), loss of tip support (deprojection), and retraction of the columella.

The photo below is a great example of a significant saddle nose deformity. You can see how the middle third of this gentleman's nose has collapsed, creating a saddle-like appearance. Nasal trauma can cause a saddle nose deformity if a blood clot forms under the septal skin lining (septal hematoma). This disrupts the normal blood supply to the cartilage which if left untreated can cause the cartilage to disintegrate. If the portion of septum injured is located high, toward the bridge the skin in that area can then collapse down given the lack of support.

This patient shows how nasal trauma can lead to a saddle nose deformity if the injury causes a fracture of the septal cartilage along the bridge. The septal injury lead to a collapse to her bridge in the supra tip area. Dr. Lamperti was able to rebuild her bridge with cartilage grafting which greatly improved the contour of her bridge. Lastly, septal perforation can lead to a loss of bridge support. These perforations can be secondary to nasal decongestant spray abuse or cocaine use among other causes.

Medical problems that can cause a saddle nose deformity

Another classic cause of a saddle nose deformity is Wegener's granulomatosis which is a systemic disease that leads to blood vessel inflammation and micro-abscesses in the upper respiratory tract that can lead to cartilage destruction over time.  The Asian patient shown at the beginning of this page has Wegener's disease which led to his saddle nose deformity.

Relapsing polychondritis is a disease that produces recurrent episodes of autoimmune cartilage inflammation and destruction within the nose, ears, trachea and joints.
Additional causes of saddle nose deformities are syphilis and leprosy (Hansen's disease). Leprosy is very uncommon in the United States but is endemic in certain parts of the world.

This gentleman came to Dr. Lamperti looking to improve his severely depressed nasal bridge that was deformed from his granulomatosis with polyangiitis (GPA) disease. His GPA was well-controlled by his rheumatologist using medication which allowed Dr. Lamperti to consider rhinoplasty repair.

The patient didn't have any nasal breathing problems and his internal nasal structure was intact. Dr. Lamperti prefers rebuilding bridges in cases like these using a patient's own tissue. Cartilage provides a great material for this purpose. Due to concern regarding the patient's Wegener's disease ultimately affecting a septal cartilage graft, it was decided to use ear cartilage.

This patient's conchal ear cartilage was long enough to span the entire length of the patient's depressed bridge. Once harvested the cartilage was carved into several sections which were then sandwiched together using sutures. This laminated graft was carefully beveled to avoid creating any sharp edges once placed under the nasal skin.

A hidden incision was then placed inside the nose on one side to allow Dr. Lamperti to create a pocket in which to place the cartilage graft. The graft was then inserted under the skin and further careful customized carving done to ensure proper augmentation to the area. The access incision was then closed with dissolvable sutures.

So what can this approach to dorsal augmentation rhinoplasty achieve? The next set of photos shows how saddle nose deformity repair improves the nose's appearance from a frontal view. Additional Saddlenose Repair Before and After Photos 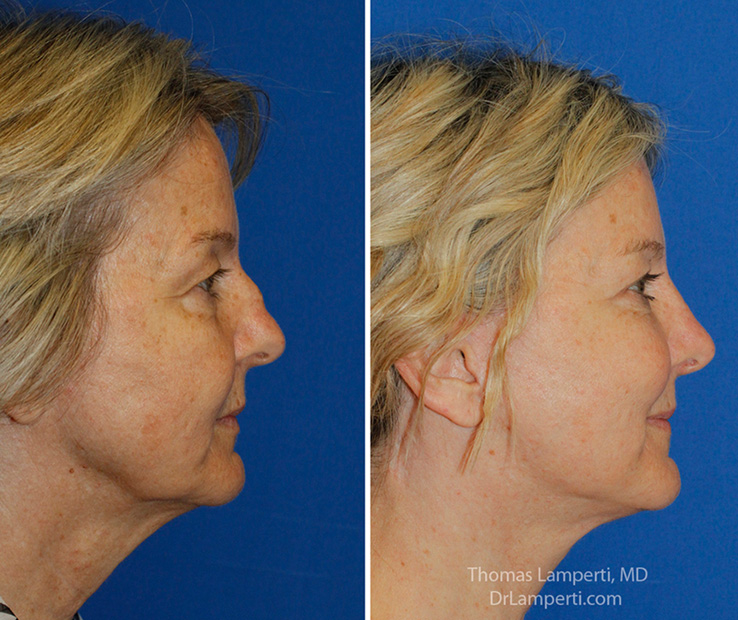 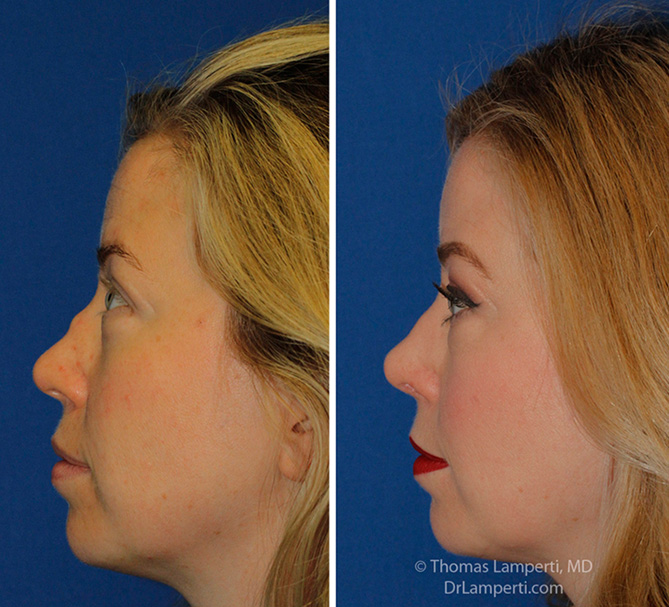 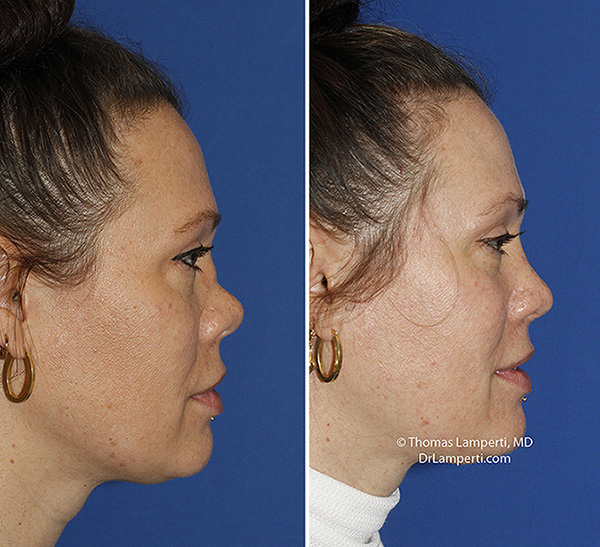