One of the most difficult maneuvers in rhinoplasty is the correction of a foreshortened or over-rotated (upturned) nose. Such nasal foreshortening can occur from birth trauma or as an unwanted side effect of prior rhinoplasty surgery. The key to improving the short nose is having adequate support to maintain the nasal tip in its new counter-rotated position.

What is a Short Nose?

A short nose refers to a nose that is proportionally too short given a person's face and stature. A relatively short nose may look fine on a five foot tall woman whereas it would look quite out of place on a six foot tall man. The length of the nose is determined by the perceived distance from its starting point at the root of the nose between the eyes down to the tip defining points. A short nose often involves an over-rotated, upturned tip that bring the tip defining points closer to the nasal root. A short nose can also be caused by a low radix which leads to a lower nasal starting point at the root of the nose. Radix grafting can be used to raise the bridge in this area and lengthen the nose.

How can an upturned tip be brought down?

If the over-rotated nose is due to prior surgery then the existing scar needs to be released to allow for movement of the the tip in a less rotated position. The best timing for revision surgery is a balance between allowing the post-operative tissue swelling to settle down and the nasal skin to relax versus not wanting to wait too long as the nasal skin will continue to shrink wrap which can make it more difficult to stretch it out over the newly reconstructed internal nasal framework.

There are several cartilage grafting techniques that can be used to create the proper internal nasal structure to allow a rhinoplasty surgeon to counter-rotate the nose and maintain it in this new position.

Caudal septal extension grafting involves using a portion of carved septal or rib cartilage (ear cartilage is not normally used as it usually is not strong enough to support the tip in this manner) to lengthen the front edge of the nasal septum (the portion of septum by the nostril openings). This extension graft is sutured to the existing nasal septum providing a very strong, stable support structure. The cartilage graft can be made wider where it attaches to the tip allowing the tip to be pushed further downward, creating a more counter-rotated appearance. The schematic below shows where a caudal septal extension graft is placed: You can watch a video showing how to carve a caudal extension graft from rib cartilage here.

An additional method to help push an upturned tip downward is the extended spreader graft. As the name suggests this type of graft is fashioned similar to a standard spreader graft, but is made longer than normal which provides a structural point where the nasal tip can be fixed in a less rotated position. Up-turned nose from prior rhinoplasty

One of the most common causes of an upturned, over-rotated nose is prior rhinoplasty. This is especially the case with rhinoplasty that was overly reductive. The resulting scar contracture can cause the underlying nasal tip cartilage to become upturned with time. It is the contracture and tightening of the overlying skin that complicates the process of correcting the foreshortened nose since this resists the downward movement of the tip cartilages.

This gentleman had a rhinoplasty with a different surgeon to remove a dorsal hump about 6 months before coming in to see me. He was unhappy with how upturned his nose had become since having surgery. Additionally, his bridge appears over-resected, especially at his radix (the upper portion of his bridge between his eyes). This results in a pollybeak appearance with a persistently full supratip. Not only does his nose look less masculine as a result but it leads to what some call a pig snout effect due to the fact everyone is looking up into his nostrils on frontal view. Using an open revision rhinoplasty approach Dr. Lamperti was able to address all of these issues. Cartilage grafts were taken from the patient's septum and ear to allow Dr. Lamperti to create a strong, stable nasal framework. A caudal septal extension graft was placed to help lengthen the nose and counter-rotate the tip. The after profile photo below shows how revision rhinoplasty was able to create a more masculine, natural appearance by bring the nasal tip down to a less rotated position.  A cartilage radix graft was placed to build up the nasal bridge height where it was over-resected. On frontal view you can see how much more natural the tip appears now that we aren't looking so directly up the patient's nostrils. He also has a much better nasal sidewall appearance now that Dr. Lamperti was able to fully narrow his nasal bones with revision osteotomies.

More Before and After Upturned Tip Rhinoplasty Example Photos

Below are some additional photographic examples of over-rotated tip repairs that Dr. Lamperti has performed: 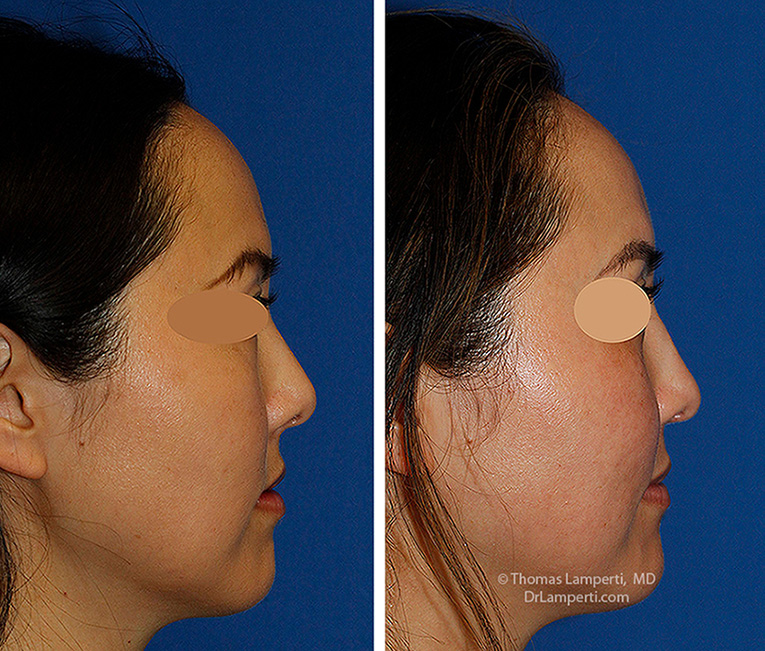